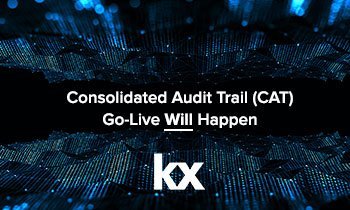 The Wall Street Journal broke news yesterday that “Stock exchanges intend to fire the contractor they hired”. Thesys Technologies is, at least at the time of this writing, still Plan Processor for the Consolidated Audit Trail data collection utility. But it appears they’re on the way out. The WSJ reporting may come as a bombshell to some, but it’s also not that surprising.

On December 11th  2018 the SEC’s Chairman Clayton laid down some heavy clues about his dissatisfaction when he testified to the U.S. Senate Committee on Banking, Housing, and Urban Affairs. In his speech entitled “Oversight of the U.S. Securities and Exchange Commission”, Chairman Clayton noted “the SRO’s were required to begin reporting data to the CAT by November 15, 2017. The SRO’s missed that deadline and the SROs remain out of compliance with the CAT NMS Plan today.”

He went on to say that “the SRO’s have reported to our staff that they currently expect to deliver the first phase of CAT by March 31, 2019.” The delayed first phase of CAT refers to the 1-year delay from November 15th 2017 to November 15th 2018. It covers Exchange reporting and is now operating with “limited functionality.” Confidence in its progress towards being properly stood up has now apparently evaporated.

The Chairman is looking squarely at the SROs as the proper accountable body. At risk of being fined for lack of delivery, the WSJ reported that “the exchanges have lost confidence in Thesys.”

The Wall Street Journal is further reporting that FINRA is expected to take over the project. Their sources also note, however, that a signed agreement is not yet in place. Assuming FINRA takes over as Plan Processor, a couple of questions arise:

I think the Operating Committee will answer these questions with efficiency of moving forward as its primary directive. Clear markers indicate the shift to FINRA as Plan Processor is well planned; expect a focus on disruption minimization. The WSJ news may lack comforting insight about how this will play out, but I suspect the Operating Committee is cognizant of the optics associated with another long delay.

Last September I wrote a blog entitled Consolidated Audit Trail Go-Live is Now a Certainty that summarized the circuitous journey CAT has taken since it was first conceived in 2012. At the time, it felt as though a tipping point towards sustainable momentum had been reached, given Brett Redfearn’s statement a few weeks earlier.

That momentum, I expect, will persist through this period of uncertainty. Yesterday’s reporting from the Wall Street Journal should be viewed as confirmation of the SEC’s serious intent. Patience, however, is required.

Expect to learn more in coming days or weeks.

Adam E. Dix is Director of Regulatory Reporting at Kx, currently based in New York City. He has extensive experience in product strategy and the development of enterprise financial software, including senior roles at Thomson Reuters.