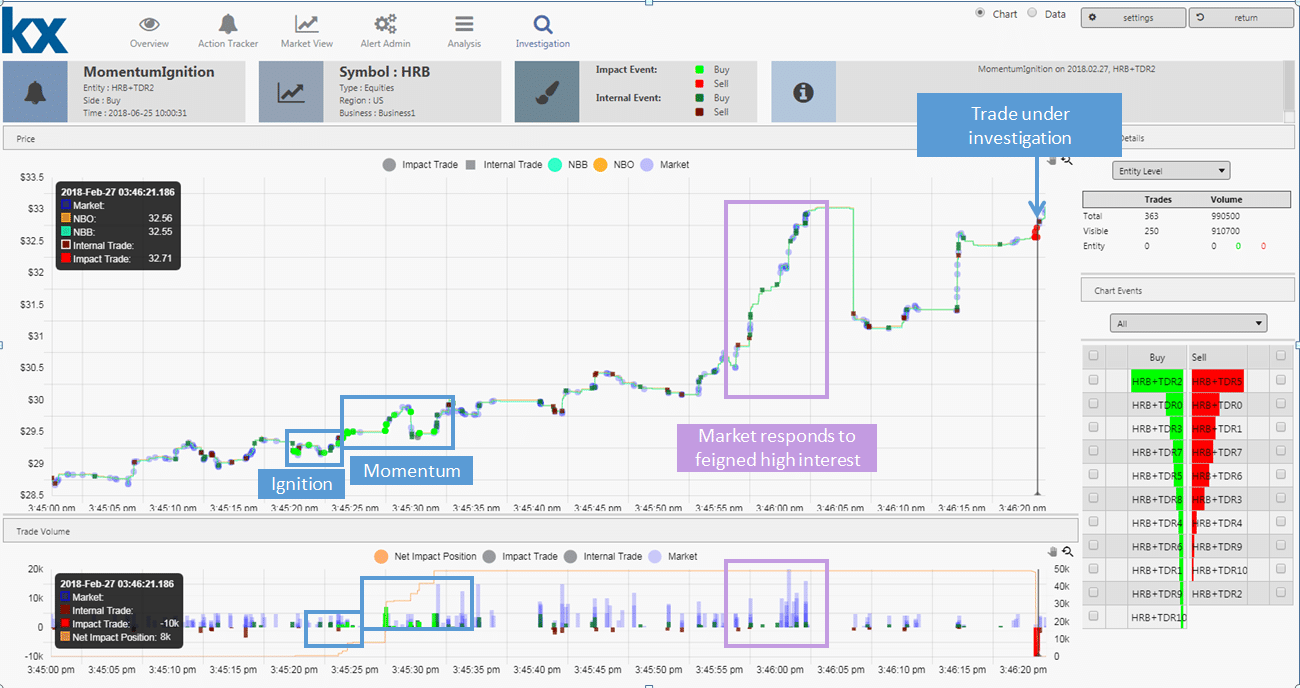 by Padraic Foley and Eoin Bourke

In this series, we take a look at what makes KX for Surveillance such a powerful tool for detecting market manipulation. This article discusses momentum ignition alerts.

Momentum Ignition (MI) can be defined in a number of ways but it refers primarily to a strategy in which market participants are induced into rapid trading activity that causes a price move outside the normal range of volatility for the targeted security. The instigator of the strategy can then profit from either closing out a pre-existing position or anticipating a price reversion. In either case, the instigator has undermined the fair and efficient operation of the market by creating misleading activity affecting the price, volume and volatility of the underlying.  Authorities and exchanges like the EMSA, ICE and CME have introduced regulation in order to protect those on the receiving of such furtive and disruptive behavior.

The efficient operation of the market assumes that all information is symmetric across market participants and that price moves for a security are based on newly available market information. MI takes advantage of this expectation in the market. The strategy in its simplest form entails the instigator trading a security (i.e. taking a pre-position), enticing other market participants to trade in response (increase demand) and then trading out. The strategy can be more sophisticated but the ultimate aim is always the same – to falsely generate a situation where demand is higher than really exists and later profit from the resulting price distortion.

MI does not need to occur in HFT environments but low latency assists in its execution. The challenge in detecting momentum ignition lies in distinguishing between real market movements and those created artificially to mislead other participants. In short, it is about inferring intent from actions. MI is identified via a combination of factors including volume spikes, price movement and cancellation rates. The KX Surveillance system identifies the following:

The premise of the alert is that trade ignition and momentum phases have already occurred and the trader is now benefiting through trade reversal.

The figure below demonstrates a potential instance of this type of Market Manipulation from the KX Surveillance Platform, 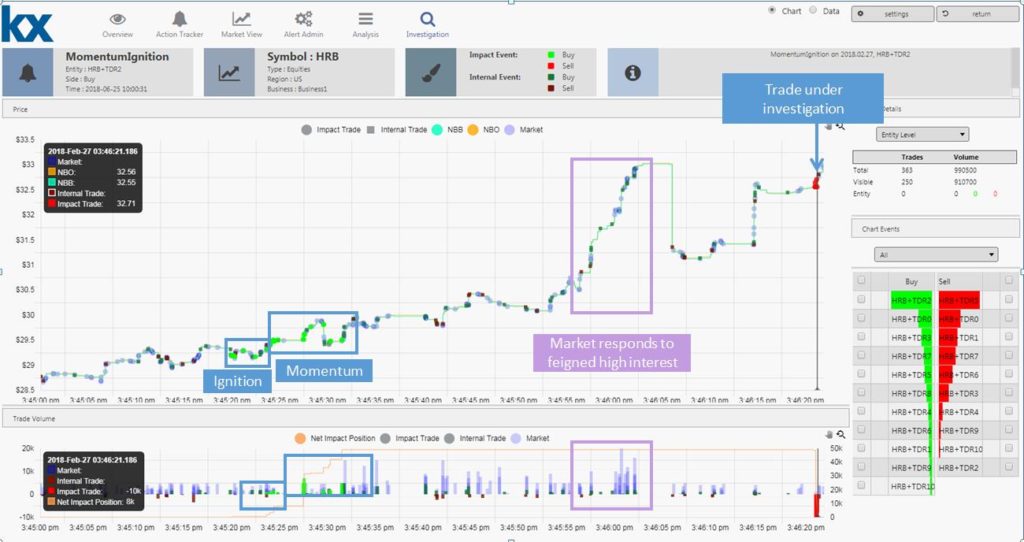 The illustration above displays a trade price graph with a trade volume graph bar chart underneath. A sell trade by the trader under investigation is marked.

As can be seen on the graph, up to the time of the sell/buy trade, the logic constructs time windows to validate if the entity has made a profit on a trade after the successful instigation of a price move in an earlier window. The critical elements being the instigators buy/sell volume during each time window.

The KX solution provides a large amount of configurability on the part of the investigator. A simple user-interface enables suitably authorized users to configure all time windows for investigation and set the defined thresholds. Thresholds for high volume entities can be benchmarked on historical prices in order to correlate them to changing market conditions and reduce false positives.