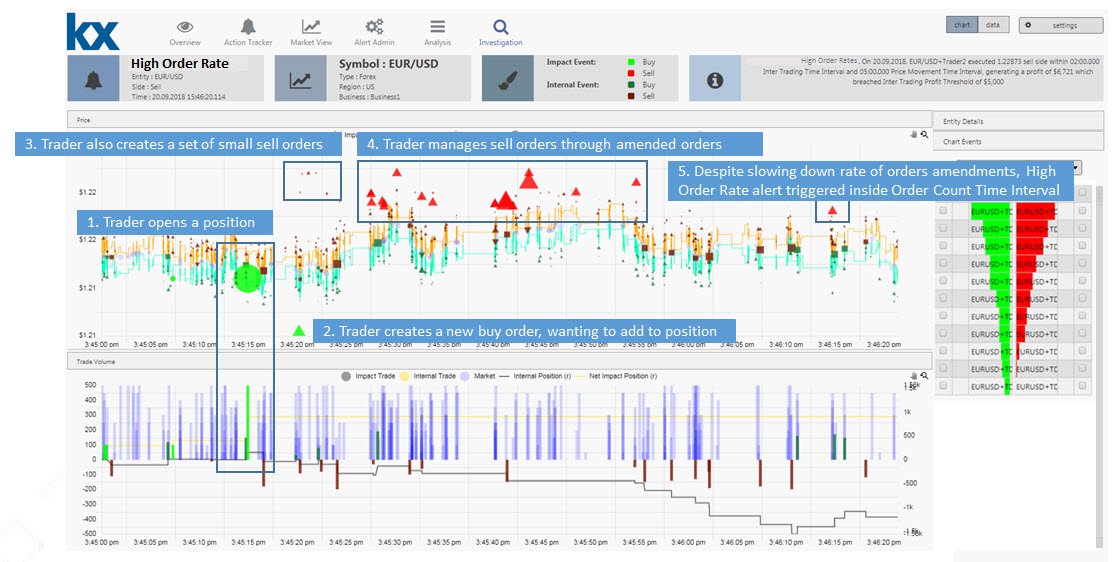 KX has a broad list of products and solutions built on the time-series database platform kdb+ that capitalize on its high-performance capabilities when analyzing very large datasets. In this series, we take a look at what makes KX for Surveillance such a powerful tool for detecting market manipulation. This article discusses the High Quote Rate alert.

High quote rate alerts are designed to detect entities who try to overload quotation systems by exceeding pre-defined count thresholds. They do this in an attempt to manipulate the market using a variety of tactics but they are characterized, in general, by a high volume of ‘cancel” or ‘amend’ transactions being executed in quick succession, within pre-defined time interval.

One market manipulation technique that this alert can detect is known as ‘quote stuffing’. This tactic is sometimes used by high frequency traders and involves rapidly entering and withdrawing a large number of quotes in an attempt to flood the market. A European securities and markets authority (ESMA) report describes it as:

Entering large number of orders to trade and/or cancellations and/or updates to orders to trade so as to create uncertainty for other participants, slowing down their process and/or to camouflage their own strategy (ESMA, 2015).

This kind of market manipulation specifically aims to increase trading system latency by overloading buffers and causing price delays until the backlog is processed. This can create opportunities for some algorithmic traders.

The 2010 Flash Crash, a US trillion dollar stock market crash that lasted 36 minutes, was an event which sparked debate over stability and fairness in the U.S. equity marketplace. The crash called into question possible market manipulation tactics described above.  Some reports suggested high-frequency trading firms were to blame and could have used quote stuffing to create arbitrage opportunities. A subsequent report by the SEC, however, somewhat downplayed quote stuffing’s potential role:

Some market participants and firms in the market data business have analysed the CTS and CQS data delays of May 6, as well as the quoting patterns observed on a variety of other days. It has been hypothesized that these delays are due to a manipulative practice called “quote-stuffing” in which high volumes of quotes are purposely sent to exchanges in order to create data delays that would afford the firm sending these quotes a trading advantage. Our investigation to date reveals that the largest and most erratic price moves observed on May 6 were caused by withdrawals of liquidity and the subsequent execution of trades at stub quotes.  (CFTC/SEC, 2010)

Nonetheless, regulators responded quickly by introducing heightened standards to give greater protection to investors. The standards increased execution transparency across asset classes and ensured accurate surveillance trails. MiFID II, for example requires brokers to report execution information including not just quote rates, but surrounding market information with detailed timings and statistical measures on the interval between acceptance of offers and their execution. These obligations introduce significant challenges:

In order to meet such stipulations firms must ensure they have a sophisticated solution like KX for Surveillance that provides comprehensive functionality for detecting and investigating possible regulatory violations. 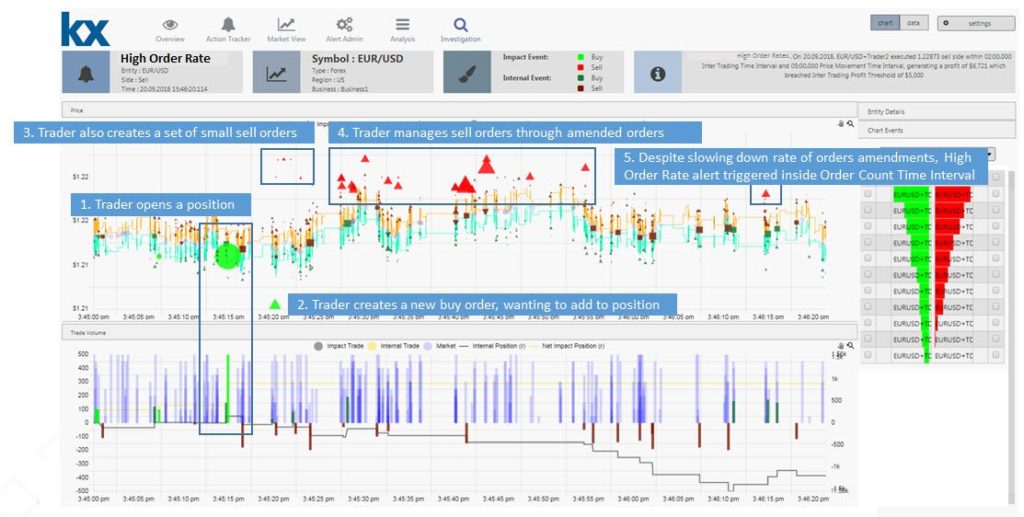 The screenshot above illustrates a high order rate alert identifying a trader who sought to drive prices lower to meet his buy order. The trader used a set of sell orders which were then amended in quick succession in response to market price action. For high quote rates, the solution is calibrated in such a way where the alert triggers when there have been a number of quotes in a short space of time which break pre-defined quantity and time benchmarks.

KX for Surveillance is widely used by financial institutions for monitoring trades for regulatory compliance. The surveillance platform can instantly detect trading violations such as those laid out under Market Abuse Regulation (MAR), for example. Customers can calibrate their parameters in real time to improve their detection quality and accuracy. The flexibility of the historical database and replay engine eases retrospective investigation for new types of fraudulent behavior and suspicious activity.