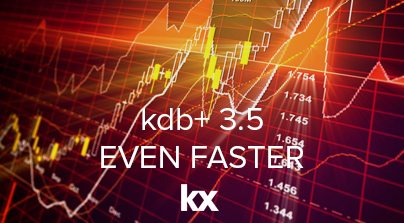 KX Speeds Up Performance with the Latest Edition of its Database Platform, kdb+ Version 3.5

Palo Alto (15 Mar 2017) – KX Systems, the acknowledged leader in time-series analytics for streaming, real-time and historical data, today announced the release of a new edition of its database and analytics technology, kdb+ version 3.5.

This latest version of kdb+ includes a number of features that significantly speed up its performance, as well as increase developer productivity. Following the official release of the previous version, kdb+ 3.4 in 2016, KX customers have been able to get the benefit of new software enhancements throughout the year, after extensive testing. Kdb+ version 3.5 brings together all of those improvements as well as major new features.

“We are always looking for ways to continually improve our software. With version 3.5, we have enhanced the debugger to make it easier for developers to find where a problem has occurred when they are coding, and to inspect the environment around an error,” said Simon Garland, Chief Customer Officer at KX. “Other new features include the introduction of shared ports, requested by a customer to handle ever increasing data loads; and an improved memory allocator, which in certain situations could make a program run orders of magnitude faster. This latest version of kdb+ has major speed-ups for complex joins which is one of the areas in which our database has always been particularly strong.”

KX is widely used in financial services and is now growing in popularity across other industries, such as retail, pharmaceuticals, utilities and telecoms. A robust suite of business intelligence tools and visualization dashboards built on kdb+ are also available through KX.
The production version of kdb+ 3.5 is now available to licensed users; for users of the previous version the upgrade is seamless. The free 32-bit version of version 3.5 will be made available shortly on devweb.kx.com.

KX and kdb+ are registered trademarks of KX Systems, Inc., a subsidiary of First Derivatives plc.

KX is the world leader in high-performance, in-memory computing, streaming analytics and operational intelligence. The company’s focus is on delivering the best possible performance and flexibility for high-volume, data-intensive analytics and applications.

The world’s largest banks, brokers, hedge funds and regulators rely on KX technology to address the challenges posed by exploding volumes of data, regulatory requirements and the need for ever-faster processing in the global financial markets. Independently tested and benchmarked, KX is unique.

With more than 100 major global corporations as clients, KX works closely with its user group to drive and prioritize its R&D to continually deliver innovation and real-world benefits, as well as supporting its customers’ success with tools, solutions and services. As the Internet of Things creates never before seen volumes of structured machine data, new industries are embracing KX technology’s proven ability to store and analyze data in real-time.

KX Systems, Inc. is a subsidiary of First Derivatives plc., which is quoted on the London Stock Exchange (FDP:LN) and is a global supplier of software and consulting services. First Derivatives has enjoyed double-digit revenue growth every year since it was incorporated in 1996.